I found myself on the Mediterranean island of Corsica. It was an amazing spring day and my dear husband and I were walking through a flea market near a marina. Yes, there were the typical flea market vendors, lots of touristy clothes, some really nice handmade jewelry, sandals and hats… and then we got to the farmers market.
Oh, if only we had something like this every day at home! At home we have too many vendors selling the same vegetables and fruit each weekend. But here on this rather remote island we had (count them) three different kinds of artichokes! Two different kinds of radishes, eggplants of many sizes and colors including striped, 4 or 5 varieties of tomatoes, countless greens, celery with their roots, citrus galore, onions aplenty, bounties of beans both dried and string, … I had found farmers market heaven.

But then there was the spice merchant and I think my vision got tunneled and my ears began to buzz. The local citizens buy their spices fresh ground, used them liberally, knew how to use them, and bought them fresh weekly. Epiphany! 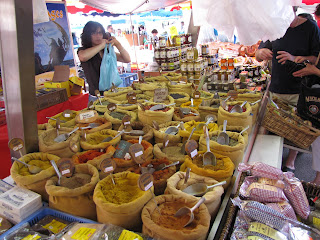 It was at that moment that I realized that the magic of the commonly discussed health benefits of “the Mediterranean Diet” is not in simply drinking an occasional glass of red wine, eating pasta, lots of olive oil, and don’t forget the fish. The real power might just come from the fact that the people of these temperate locales bought their veggies and meats fresh daily and cooked them right away. There were no grocery stores to spray their foods with preservatives, no food factories. Their foods were not grown a continent away, picked long before ripe weeks ago, wrapped in plastic, air freighted and trucked to the local store. They bought their meats from the butcher two blocks away, their bread daily from the bakery, and their vegetables at this market.

The food was, in a word, fresh.

I went home from that trip and threw out all of my old spices, went to a local store that sold fresh spices by the ounce, and started my culinary life over again fresh. Pink Himalayan salt? Into the pasta sauce with you! Cumin? On eggs? You betcha! Cinnamon in my chili instead of sugar? Why didn’t I try it sooner? Dill and oregano on my salad? Mmmm. And I just munch away and imagine those healthy spices and fresh vegetables working their Mediterranean spell.

View all posts by ladyhawknut →

Subscribe to our health newsletter to receive the latest news, helpful tips and healthy recipes.

Maggie has a Bachelor of Arts degree from Washington University in St. Louis, MO. She received her Doctorate of Naturopathy from Clayton College of Natural Health and graduated with honors. Learn More

Naturopathy and counsel from a naturopathic doctor complement services provided by your primary doctor.